"Origins of nomadic peoples are difficult to trace

as they leave little evidence behind for archaeologists..." 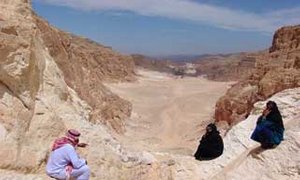 In the Arabic language 'bedu' refers to one who lives out in the open, in the desert and the word  'badawiyin' (of which the English word Bedouin is derived) means desert dweller.  In ancient times people settled mostly near rivers but Bedouin people preferred to live in the open desert.

Altogether the Bedouin population is estimated at around 4 million people only. Bedouin are seen as Arab culture’s purest representatives. 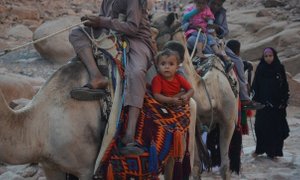 They are continued to be hailed by other Arabs as 'ideal' Arabs because of their rich oral poetic tradition, their lifestyle and their code of honour.

Egyptians refer to Bedouin as 'Arab' (which is synonymous with the term 'Nomad' since the beginning of Islam), but Bedouin are distinct from other Arab’s because of their extensive kinship networks (which provide them with community support and the basic needs to survive) and their rich culture.  These networks are traditionally to ensure safety of families and to protect their property. Today only an estimated 5% of the Bedouin people still live as pastoral (semi)nomads in all of the Middle East. 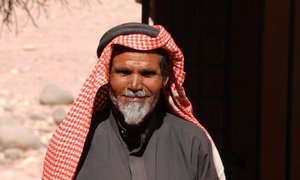 Bedouin are recognizable by their lifestyle, language, social structure and culture. They have different facial features then other Egyptians and also they generally dress differently. The men wear long 'gallabeya' with a thin cotton pantalon down, a red/white (smaegh) or white (amemma) headscarf, sometimes held in place by  a black cord (aghell). The women wear colored long dresses and when they go out they dress in a thin, long, black coat (abaya), sometimes decorated with embroidery. They will always cover their hair with a usually black, thin scarf (tarha) but nowadays some 'dare' to wear more colorful ones. 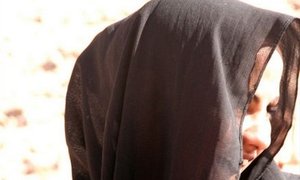 Traditionally the women covered their face behind a decorated face veil (burqa'ah) but nowadays we only see this in the oldest generation. The younger generations simply cover their face with their tarha.

Bedouin also have  their own Arabic spoken language (Bedawi) which has different dialects per region.

In former days Bedouin emphasized on the strong belief in the tribal superiority and security - the support to survive in a hostile environment. They are still a proud people who cherish their lifestyle. 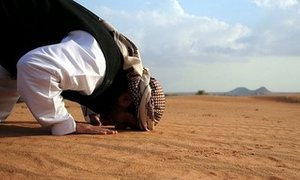 Some Bedouin trace their lineage back to the times of the Prophet Muhammad (PBUH) and beyond. The first muslims came from the Bedouin tribes and thus the (Sunni) Islam is embedded and deeply rooted in their culture and prayer an integral part of life.

"The Bedouin" is generally open- minded and interested in what is going on in his immediate and distant surroundings, as this kind of knowledge has always been essential for survival. At the same time they are rather suspicious and aimed not to discuss their personal background. 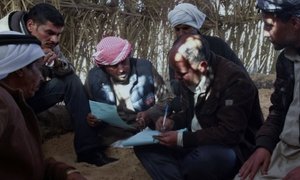 Modern Arab countries tend to regulate the nomadic lifestyle. Bedouin want to provide their children with health care and education and for this they need to settle in urban areas. They are thus faced with challenges in their lifestyle and their traditional islamic, tribal culture which slowly mixes with the Western culture. The men are more likely to adapt to the modern culture, but the women are bound by honor and tradition to stay within the environment of the family and therefore are less likely to progress.